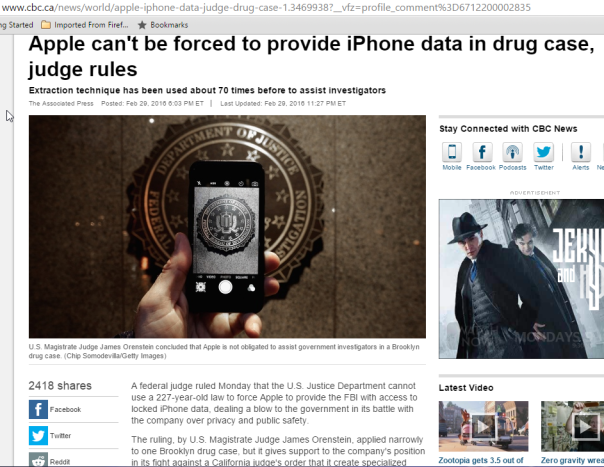 Ah, for krysakes, do I have to run that goddamned picture again?

Yet CBC and the ICUC censors had no problem with essentially the same remarks in other posts:

Quoting “Until the day comes when Politicians and their appointed Officials can be held Legally Accountable for Abusing Personal Data, it should be treated as your very own Personal Private Business. Laziness & Incompetence are at the bottom of craving to know Everything about Everyone, All the Time and is Not to be Trusted.” — “My” member of parliament is Robert “Rob” Nicholson. Sadly he remains so having been re-elected by a majority (I suppose) of 41 per cent. Fortunately, ol’ Rob’s not in a position to do anything any longer. I’ve been telling him for seven years: before you demand all this police state authority,  I want to knock on your door, search your home, your office, all your devices and go through your belongings. Then we’ll talk. And I’ll still say, “no.” You can’t have it.

CBC and ICUC stepped in it this time. They proved just how hypocritical and tyrannical their censorship is when they killed comments which were clearly within CBC’s “community guidelines” while letting through comments joking about sexual innuendo and outright paedophilia. 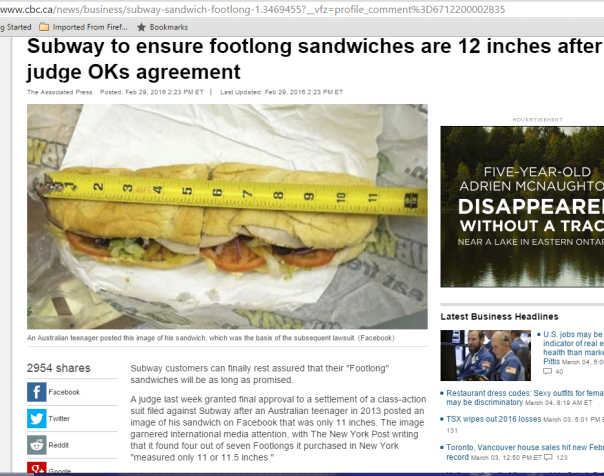 Now, let’s look at some of the comments they did let through:

@Julius Caesars The CBC does what it wants to do

without ANY real consequences. The CBC disables

comments that its censors are TRAINED to do. Versions

of what life was like in EAST GERMANY before the wall

Well, there is that saying “Size does matter” but I wouldn’t have attributed it to Subway sandwiches. (8 likes)

Geez Jarrod ate those subs exclusively for years . I wonder how many inches he was ripped off for? (2 likes)

@Stickboy
He’s going to get free footlongs for the next 15 years. (9 likes)

Do we really need any more Jared/footlong jokes?

Thats what she said.

I hope Jared doesn’t get shortchanged in prison.

184 of us actually see a reason to comment on such trivia? We need lives

Submitted to CBC Feedback on March 4:

Among my latest examples of your comments section censorship, I noted (in a Kevin O’Leary article) how I replied to a comment which said, “No, thanks.” My reply was, “Yes, please!”

As I stated on LettersToTheBeast, every time I think you people have reached a new level of blatant, obvious censorship, you take it as a personal challenge.

I’m here to tell you that I’m not going anywhere. I no longer care if you block my comments, because I will simply put them on my own site. And, by the way, typing CBC content disabled returns my humble effort as link number two. Right under CBC itself. Oh, and by the way, check out all the obnoxious comments your censors DID let through on the Subway Foot Long story.

And, one last thing, when you DO eliminate the comments section (and I hope Keith Bilous paid cash for his Tesla, otherwise he’ll be excreting bricks when that happens), I will put your stories (and in most cases, “stories” are exactly what they are) up on my site, and then tear them apart bit by bit pointing out the lies (see https://letterstothebeast.com/2014/10/13/malala-yousafzai-toronto-globe-and-mail-uses-every-trick-in-the-book-to-attack-truthers-and-conspiracy-theorists/) as an example.

Oh yeah, and I like how your censors continue to block any reference to the idea that Mrs. Hillary Clinton may have some, uh, legal problems. And pointing out what happens when you type in John McCain and ISIS.

You know, you really should listen to your new patron, Justin Trudeau. Because now it’s 2016. You can’t get away with the same lies and the same deception you used to sell us babies, incubators and Saddam’s Nukular Bombs.

Malala Yousafzai: Toronto Globe and Mail uses every trick in the book to attack “truthers” and “conspiracy theorists”