I sent copies to the usual suspects. Harper, Rob Nicholson (my member of parliament), Peter MacKay, Joe Oliver, Justin Trudeau, Thomas Mulcair. Whenever I write about my longing for the death of the dollar, I always send a copy to the fraud artists across the street at the Bank of Canada, too.

While the world’s attention has been distracted by the Ukranian government’s shoot-down of a Malaysia Airlines commercial jet, the government of The Apartheid State has accelerated its war crimes in Occupied Palestine.

At last count, nearly 800 Semites have been killed, over 100 of them children. I understand, at last count, exactly one Occupier has been killed. The pretense for this latest round of war atrocities is the “kidnapping” and death of three “teenagers” (i.e. young men of military age) in an area controlled by the Offense Forces of The Apartheid State. Despite the fact that the two suspects in this crime were two young men known by the elected government of Palestine (Hamas) as “troublemakers,” citizen occupiers in turn abducted and burned alive a third young man who was wholly unconnected with the original crime. And later, they savagely beat his cousin from the United States, who had come for the boy’s funeral.

The Apartheid State regime has used the launching of bottle rockets as further justification for yet another war crime: collective punishment against the Semite Palestinians. The Apartheid State revels in shooting children from helicopters (a bad habit the United States military picked up in Iraq), bombing and bulldozing houses and pouring white phosphorous from above and burning people to death. With regard to the latter, I had hoped The Apartheid State had given this particular tactic up after the worldwide condemnation which resulted from the Goldstone Report.

Gaza has been called the world’s largest open air prison. Some have compared the behaviour of The Apartheid State to the popularly-portrayed German state of the 1940s.

The Apartheid State has cut off the free supply of food, medicine, electricity, and even clean water. Palestinians are concentrated in these camps and are prevented from leaving, even for day labour.

Exceptional efforts have taken place to bring aid to the people of Gaza. Humanitarian organizations have sent floatillas to bring aid in by sea. The Apartheid State has responded with piracy, theft and murder. Unfortunately for our American friends, when the victims of Apartheid State brutality happens to be a U.S. Citizen, the official response from their own government is “yeah, okay, whatever.”

The war crimes committed by the government of The Apartheid State go beyond the atrocities of its Offense Forces. People gather on hillsides every evening, pull out their lawn chairs and blankets and wait for “the show” (i.e. for their Offense Forces to rain down Hell on the Palestinians). Unlike the German people of the 1940s, this makes the citizens of the Apartheid State complicit in their government’s crimes.

“Soldiers” of the Offense Forces stand up and shoot their enemy through fences not unlike a canned deer hunt in Texas.

After half-a-century of continued concentration, oppression and murder, Apartheid State nationals express shock and indignation when even the most minimal blow back takes place (i.e. calling their oppressors bad names, throwing rocks at tanks and launching unguided crude bottle rockets) or otherwise taking out their frustrations on their jailers. And when the situation has become so dire that some Palestinians even build tunnels in order to obtain the most minimal supplies for their daily survival, those tunnels are destroyed, their diggers called terrorists, and the true terrorism by The Apartheid State is ramped up even more.

The Apartheid State regime, and its pet regimes around the world (including yours) accuse the indigenous people of Palestine of being “terrorists.” However, the same governments telling me these people are terrorists and criminals are the same governments that told me about the Gulf of Tonkin incident. The U.S.S. Liberty being attacked by Egypt (nearly resulting in a nuclear attack on Cairo until its crew got a message out that reporting whom they were really under attack by). Iran-Contra. Iran Air 655. Grenada. Panama. El Salvador. Guatemala. Nicaragua. Iran is just months away from having a nuclear weapon (for the past thirty years). Osirak. Babies being thrown out of incubators. TWA-800. Saddam’s Nukular Bombs. September 11, 2001. The British Broadcasting Jimmy Savile Pedophile Corporation reporting the collapse of Building Seven half-an-hour before it happened. The killing of Osama bin Laden with absolutely zero evidence by the same government that proudly distributed pictures of the corpse of Saddam Hussein after he was hanged. Adam Ghadan being, in reality Adam Pearlman. Joseph Cohen’s alias being Yousef al-Khattab. Farouk Abdumattalab being escroted around security at Shipol Aiport (according to Detroit lawyers Kurt and Laurie Haskell). Assad’s chemical weapons attack. MH17 is turning out to be a false flag to blame Russia.

More false flags and contrived plots. then I can possibly recall. And then there’s the global warming hoax.

Are you and your fellow psychopaths so stupid that you think we’re going to swallow your lies? Are you unaware that we have means of independently verifying everything? Or do you think that we are so stupid that we’ll go along with you as if this is the 1950s? I’m waiting for your regime to start throwing commies and nazis at us again.

And you expect us to believe anything you guys have to say? I don’t deny that there are real, pissed-off people out there who oppose the continued theft, bombing and other acts of war against their historical lands. And I don’t deny the ability of the Federal Bureau of Incineration, the Royal Canadian Mounted Police (Benjy “Monte” Robinson) and other state security agencies to find drugged-up half-retards and then give them lots of money, plane tickets, the moral encouragement, and something resembling the means to sort of, maybe come close to setting off firecrackers. Personally, if somebody came to me (as somebody frustrated with this country’s criminal regime) and tried to talk me into “doing something,” I would tell him to go to Hell. Or back to his police station.

I remain hopeful that as countries such as Brazil, Russia, India, China and South Africa (and, according to some recent reports, Germany) implement plans to trade in their own currencies, the Federal Reserve Accounting Unit Dollar will go the way of the Reserve Bank of Zimbabwe dollar and all the world’s unrest will dry up overnight. When this day comes (and it will) the best thing you and your fellow liars, criminals and associated psychopaths up there in Ottawa could do is just leave. If a million of my fellow Canadians conclude our elections are fraudulent and pointless and show up on Parliament Hill with torches and pitchforks and chant I’m as mad as Hell and I’m not going to take this any more, I will be the one to plead with them to clear a path for you so you can reach Uplands Air Force Base unmolested in order to secure your departure. As well as that of your colleagues, friends, relatives, co-conspirators, and all the ill-gotten goods and Bank of Canada notes you can fit into as many jets as Peter MacKay can round up.

I am quite certain that when the day comes that the Apartheid State is no longer able to siphon money from around the world and have us breed soldiers to fight their endless wars, it will find a way to peacefully co-exist with its neighbours.

In the mean time, I have long since given up any hope that your regime will act in the manner of a responsible government and condemn the war crimes of the Aparthied State. Short of free elections – with legitimate, credible candidates to choose from whose first and only loyalty is to Canada – accompanied by a constitutional restoration, I am reduced to reminding you that when you express your love for the Apartheid State and do its bidding in my country, you are doing so without my consent and have earned my strongest personal condemnation. Your friends over at the Canadian Human Rights Tribunal will tell you that “hate speech” is illegal in Canada. While I oppose any government bureaucracy (especially one that claims that freedom of speech is strictly an American concept and therefore unworthy of response), I am pretty sure I am in compliance with your regime’s legislation when I tell you that I vigorously stand in opposition to the the killing of brown people by white people (especially by the most horrific means), the use of chemical weapons against brown people by white people, the starvation, dehydration and deprivation of medicine to brown people by white people, the stealing of land by occupying white people and the lynching of black people by white people.

When you stand in front of AIPAC (whom I was not aware was active in Canada until recently) and other affiliated organizations and express your love and support for the Apartheid State and its nationals at home and in Canada, you are just as much a war criminal as those brought before Nuremberg and just as deserving to be brought before a future Nuremberg II.

Regardless of whether or not you and your regime are ever brought to justice, I will not allow you to sully my name, my country and my generation in the same manner that we regard German octogenarians today or South Africans of the 1980s.

I know these e-mails are archived by federal law, and outside your regimes control. My purpose in communicating to your regime is two-fold: a) I want you to know that I see your lies and am not going along with them and; b) for future historians 50 or 100 years from now, to go through these archives and understand that for all the crimes your regime was complicit in, at least one man opposed them.

In closing, I would like to discuss with you what is commonly (and incorrectly) referred to as “anti-Semitism.” My oppostion to polygamy does not mean I hate the good people of Utah. Being against pedophilia doesn’t mean I hate Italians. My revulsion to the idea of child-killing and wife-beating doesn’t mean I hate Arabs. Mormons, Catholics and Muslims do not identify themselves with a particular country. There is only one religion that has insulated itself by identification with a country. And the “trick,” about “anti-Semitism,” as the late Shulamit Aloni, former minister of education from the Apartheid State said, is “we always use it.” As a free and sovereign Canadian citizen – and one with no allegiance to any religion or cult – I am pretty much done with you and your regime using that “trick” yourself. Yes, the charge of “anti-Semitism” is a trick. But no, it does not work any longer. 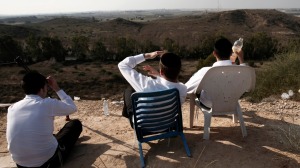 “Anti-Semitic. It’s a trick. We always use it”

She’s dead now, by the way. With apologies to Mike Rivero (www.whatreallyhappened.com), I hope God got a chance to tell her about what He thought about her people killing the descendants of His only son.