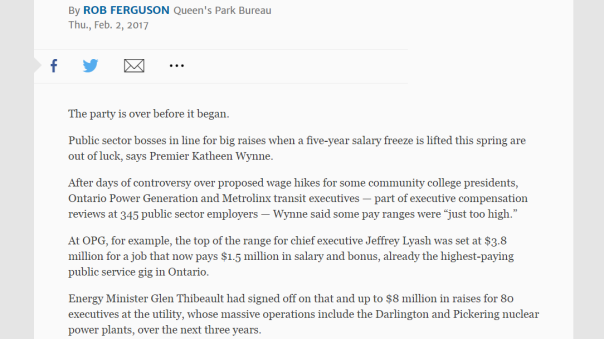 Elizabeth “Liz” Sandals  is the Member of Provincial Parliament from the Ontario city of Guelph. She also holds the position of president of the treasury board. Her job is to run the Ontario bureaucracy. And like most liberals, Lizard’s colors came shining through this week when she dismissed the qualifications of transit patrons to run a business.

The Ontario civil service has been under a five-year wage freeze, which is scheduled to be thawed this coming Spring. With that in mind, Sandals was ready to reward her most favorite cronies with massive pay increases. CEOs and other high-ranking bureaucrats at state agencies such as Ontario Power Generation, the provincial power utility and GO (Government of Ontario) Transit, a bus and train operator, were in line to see six-figure pay increases.

Ontarians live under crippling electricity rates which have increased by nearly three-quarters in just the past five years under the Liberal regime. Even the smallest apartment can cost hundreds every month just to keep warm and keep the lights on. And the government just slapped a carbon tax on electricity consumers. And then there is Ontario’s – and Canada’s – legendary confiscatory taxation.

When questioned about raises for top bureaucrats while Ontarians struggled to pay their electric bills and sat in delayed GO Trains, Sandals bristled. “Most of the people sitting on the GO Train probably don’t have high level nuclear qualifications or business qualifications to run a multi-billion dollar corporation.”

Sandals would probably be surprised to learn that the Pickering Nuclear Generating Station is served by a local transit bus which is timed to connect with the GO Train. And that bus service is run for the convenience of power plant employees. So it is probably fair to say that a good number of those plant workers are indeed riding the train to work.

As for the corporate workers, it is obvious Liz has never set foot on a GO Train, or a GO bus for that matter. Since its inception, GO has gone out of its way to be an attractive public transport option. They operate modern vehicles and relentlessly enforce the concept of customer service on their staff. A monthly fare for even the shortest ride can cost hundreds of dollars monthly.

Sandals’ constituents in Guelph who ride the GO Train into lucrative jobs in Toronto every day pay nearly $300 per month to GO Transit. Riding GO is an expensive proposition and  one can assume those passengers are making good coin at their jobs. Trains are 10-12 cars long, and each car holds about 150 seats, plus standing. During rush hour, each and every one of those 1,500+ seats, plus every square foot of standing room, is filled. And those trains run every 15 minutes or better on some lines. Most of those passengers are wearing suits or blouses. Most of GO’s passengers – whether on the train or on the bus – are well-heeled and GO management knows this. Management refers to them as “choice passengers.” They have the option to drive their own cars (yes, GO passengers own cars, too). But they choose to take the train or the bus. And between canceled and delayed trains and broken down, brand-new, $1-million buses double-decker buses, GO’s passengers put up with a helluvalot for their hard-earned money.

Somebody with Liz’s ear had better inform her we are talking about GO Transit here, not the Detroit Department of Transportation. Perhaps Premier Wynne can tell Liz this. On her way out the door.

In a single sentence, Liz Sandals dismissed GO Transit as a social service and relegated their passengers to lowly peons. Apparently, the only people worthy of Sandals’ esteem are those riding into their downtown Toronto jobs in chauffer-driven limousines. Like herself.

LettersToTheBeast thanks Mrs. Sandals for her insightful and revealing commentary on the ruling class’s contempt for the average voter.

Now get in your train, shut up and pay your taxes and electric bills. And vote Liberal. Early and often.

Your humble correspondent sent this electric letter to Missus Wynne:

Premier of the Province of Ontario

As a Canadian, a voter, and most importantly a taxpayer in the province of Ontario, I am writing to express my highest condemnation for the behavior of your president of the treasury board, Elizabeth “Liz” Sandals and her mocking of GO Transit patrons.

Putting aside the hundreds of dollars each of the 130,000 passengers are paying each day (9/10 of those riding the train), and putting aside her ridiculing the very people who likely voted for your regime, and further putting aside the higher incomes of most GO Transit passengers and their corresponding confiscatory taxation, it comes down to this: Your woman just attacked your own customers. The customers, I might add, who endure two-hour train rides from Kitchener into Toronto (plus delays, of course). That creature needs to be ridden out of town. On a rail.

It’s as if the CEO of General Motors deliberately set out to kill the mostly-young consumers of the Chevrolet Cobalt by installing a deadly ignition system. Or Mark Zuckerberg, the C.E.O. of Facebook, called his customers a bunch of dumb-(fornicators). Oh, wait, those two actually happened.

The unmitigated nerve of that woman, Missus Sandals, to defend the extraordinary pay increases to senior mandarins by mocking the intelligence of business skills of patrons of your own railway…beyond the pale is not even the word. I don’t have the words in my polite vocabulary to express what happened.

And Missus Sandals’s defense of her remarks? “It doesn’t reflect my views.” Come on, really? That is so classic, so liberal. Every politician (most liberals) say that after they’ve been caught. I’ve got another phrase Missus Sandals better familiarize herself with: “I have decided to spend more time with my family.”

Mrs. Wynne, you had better fire that woman immediately. You can’t do anything about her seat in your club at Queen’s Park. But you can remove her from cabinet and even from the Liberal caucus. I’m sure even on an M.P.P.’s salary alone, she won’t have to resort to riding with the unwashed masses on the GO Train. But dealing with traffic, driving her own car, with no chauffeur sounds like it could be a real eye-opener for her.

As a conservative-minded voter, I have absolutely had it with parties of all stripes. I can’t believe I’m saying this: I voted for the stinking N.D.P. last time around because they were the least incompetent and the least corrupt. That’s a pretty stupid way to run a government. For the past 15 years, your party has mistaken the voters’ condemnation of the incompetence and ineptitude of three (now four) Tory leaders as an endorsement of your party’s high taxation, higher spending ways. You have similarly mistaken the voters as countenancing your corruption and your own incompetence and ineptitude.

While I plan to not be around to see the results for myself, let alone to have to live with them, hopefully the next election will convince the voters of Ontario that maybe this Patrick Brown guy is actually less corrupt, less incompetent and less inept than your regime. And he and his party will be swept into office with a majority. When voters start electing children who have never gone to school, as the good people of Grimsby did, you have to conclude they (i.e. “we”) are at the end of our collective rope.

Between commercials featuring Missus Sandals and her insulting and condescending remarks about public transport patrons, the slogan for the Progressive Conservative Party in the next election ought to be “Lock her up.”

In closing, when the taxpayers of Ontario (which I hope to cease being very soon), are theoretically on the hook for twice the money owed by the federal government of Russia, the good people of the GO Train need take no lessons from you, Missus Sandals, or anybody else in your regime.

Between the corruption, the arrogance, the condescension, the waste, the debt, the electric bills, the confiscatory taxation and, yes, the GO Train fares, I don’t think you fools realize just how angry people are.

Resign. All of you.

p.s. You, Missus Sandals and your fellow Queen’s Park critters do realize you are not our bosses. And we don’t work for you? Don’t you? Maybe I’d better call U.P.S. and send all of you some cake.

Any resemblance between Lizard Sandals and…

is one helluva coincidence. 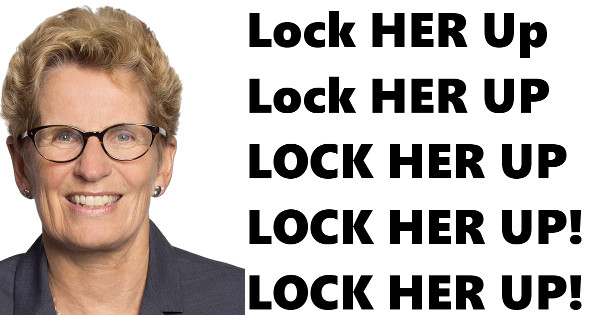