Seriously? Some idiot at A.P. actually wrote this? And another idiot – an editor at Associated Press approved it? And then a mindless idiot at CTV (the Canadian Television Network), having seen all the in-house reporters laid off in recent years due to the decline in corporate media, pushed it on to the website? And nobody said, “You know, the masses are going to say this really is the pot calling the kettle black here…” 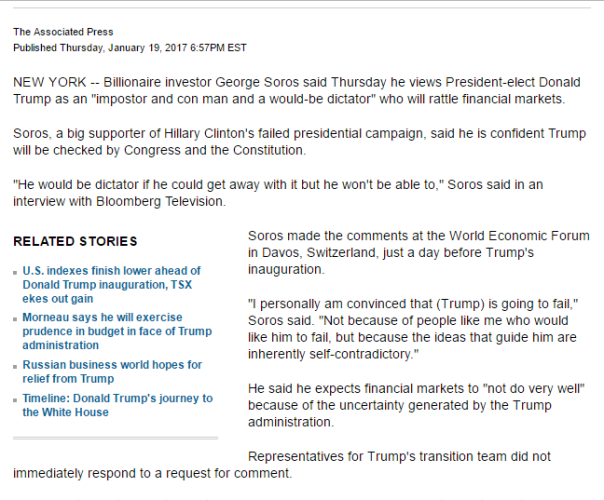 George Soros…the man who has made untold billions over the decades by “rattling markets” and impoverishing the average man, woman and child. The unnamed typist writes this tripe as if Soros is regarded as a nice, old businessman offering his sage advice. As if the entire planet doesn’t see him as a greedy, megalomaniac serpent. As if the entire planet doesn’t hate George’s guts and wants him dead.

A.P., C.N.N., and the corporate media presstitutes and whorespondents who carried this trash verbatim are no doubt hoping that Uncle George will send some of his largesse their way, not unlike Snopes, Media Matters, the Huffing and Puffington Post, among many others.

The best part of the article was no doubt in the second to last paragraph: “…he expects financial markets to ‘not do very well’ because of the uncertainty generated by the Trump administration. 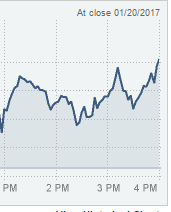 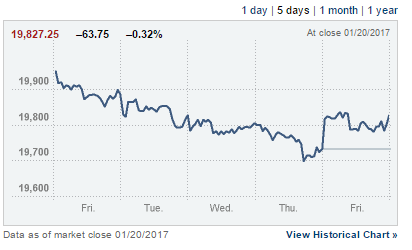 The banksters were indeed depressed as Trump’s inauguration approached. But lo and behold, as his speech continued, look what happened around 1pm? The Dow went up.

Donald Trump knows the markets are as rigged as the primaries, the debates, and the general election. But he got past all that corruption and fraud and has made George very, very angry. Those who know him say Soros hasn’t been this angry since he was a 14-year-old Hitler Jurgen.

Yes, the markets are rigged. And if the federal reserve knows what’s good for it, it’s going to start pulling back on the fraud and “rigging” the markets in favor of the people.

As for George Soros, it really is a shame the legends of gas chambers and mass death camps are just that…legends. Because if they were true, then George Soros himself should have turned one of those ovens to the highest setting, climbed in and closed the door behind him. And had his been the only death in one of those ovens, the world would be a better place today. And if Alex Soros and George’s other satanic progeny think we – the people of planet Earth – are going to let him step in and fill Daddy’s shoes once he takes his rightful place in hell, they’ve got another thing coming, ALEX.

It’s a great time to be alive. We’re going to slay the new world order. Soros, you’re only going to be the first casualty. Rockefellers and Rothschilds, we’re coming for you! 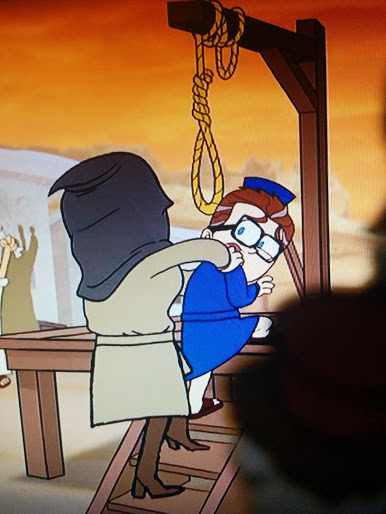