Trump said the tweet had no anti-Semitic intent, but it’s not the first time the candidate has repeated remarks coming from racist corners of the Internet 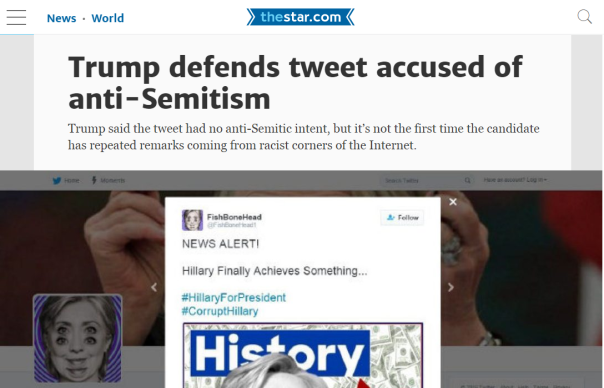 Trump tweeted, “Dishonest media is trying their absolute best to depict a star in a tweet as the Star of David rather than a Sheriff’s Star, or plain star!”

I guess Trump never got the memo that a star, any star, is a registered trademark of israel. Just like “holocaust.” But you’d better not talk about homosexuals, gypsies, disabled people or anyone else who ended up in German slave labour camps in the 1930s and 1940s. Because israel owns that brand.

The original tweet, at 9:37 a.m. Saturday, the day Clinton was meeting with the FBI, showed a red Star of David shape against a backdrop of $100 bills. The presumptive Republican presidential nominee deleted that tweet by 11:19 a.m. and replaced the star with a circle in a subsequent missive. But critics had already picked it up.

Yes. Funny how this comes out just as Hitlery is “meeting” with the federal bureau of incineration. And no mention, of course, of Mister Clinton’s “meeting” with attorney general Loretta Lynch. Clinton parked his airplane next to Lynch’s airplane at Phoenix’s Sky Harbor airport.

“How everybody looks bad because Bill Clinton met with Loretta Lynch.” I guess this is Corporate Media’s way of telling Bill and Lorrie they did something so incredibly stupid that now their media organs have to expend time, money and credibility to bail them out. Again.

“We’ve been alarmed that Mr. Trump hasn’t spoken out vociferously against these anti-Semites and racists and misogynists who continue to support him,” said Jonathan Greenblatt, chief executive of the Anti-Defamation League. “It’s been outrageous to see him retweeting and now sourcing material from the website and other online resources from this crowd.”

In November 2015, he tweeted a chart of bogus crime data from the fictional Crime Statistics Bureau, which wildly overstated how many white people were killed by black people. Charles Johnson, proprietor of the blog Little Green Footballs, traced the image to a Twitter user whose biographic information suggested that “we should have listened to the Austrian chap with the little moustache,” a reference to Adolf Hitler.

Ah, yes. Godwin’s Law at work. I was wondering when they would get around to mentioning Time Magazine’s Man of the Year for 1938.

Donald Trump did not seek israel’s permission prior to running for president. And for that, israel’s agents – the corporate media worldwide – are making him pay. The problem is (at least if you are corporate media), nothing has worked. Ignoring him hasn’t worked. Dismissing him hasn’t worked. Nor has marginalizing. Assurance to what’s left of Corporate Media’s devotees that his candidacy was merely a joke, a flash in the plan, a fad, all turned out to be inaccurate.

So now it’s time to bring out the Big Guns. “Anti-semitism.”Racism. As if to suggest israelis and israeli-Americans are anything other than lily white.

Donald Trump has extended some olive branches towards our colonial masters. And this is disturbing. One can only hope this is only for show.

There is a reason why israel’s Chief Neocon in America, Bill Kristol is in a full-blown panic. Trump is not controlled by them. His election will result in blowing things wide open. The Clinton body count (starting with Vince Foster) is only one of many things Trump has the potential to investigate. And when Trump gets around to investigating September 11, 2001, it’s game over for the government of israel and its strangle hold on the U.S government. And governments around the world for that matter. That is why the Republican “establishment” is willing to see Hillary Clinton president. If one needed any more proof the “left” and “right” are controlled by the same people, look no further. Hillary can be trusted to keep the secrets the “elite” need kept secret. She will keep the same people in their same cushy jobs. A Donald Trump presidency guarantees people will go to prison and the criminal element of the U.S. government (i.e. most of the U.S. government) will collapse.

LettersToTheBeast encourages Mr. Trump to stay out of small aircraft and avoid taking shortcuts through hotel kitchens. He may want to steer clear of the Atlanta Jewish Times as well. For his own personal safety.