Never let the facts get in the way of a good story. Especially if you are a publicly-funded state broadcaster with an endless supply of cash.

The CBC’s Makda Ghebreslassie (gezundheit! — LTB)  recently reported on the arrest of a woman for speeding and driving with an Ontario driver’s license in Georgia. 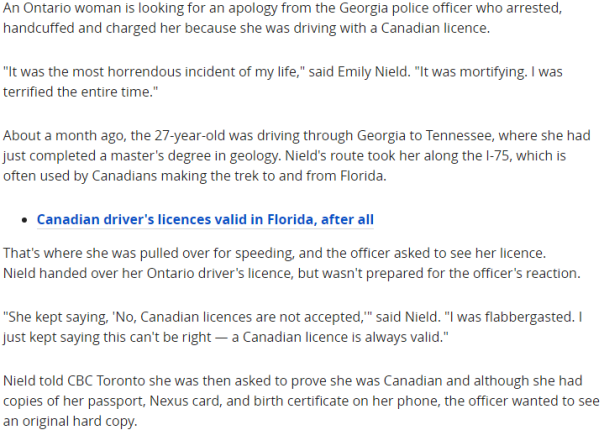 According to the CBC’s initial claims, 27-year-old Emily Nield was arrested after being stopped for speeding in Cook County, Georgia. The report claimed the officer did not recognize the validity of her Ontario driver’s license.

Spectacular. Isn’t it? Well, not quite. Read a little further down and we find out Nield actually claimed to be a resident of Tennessee.

Nield also claimed she was told she would be held until June 12. Uhhh, not quite.

The best part of the whole tale was how police refused accept the “documents” held in her cellphone.

Those documents (driver’s licenses, Nexus cards, passports, etc) are issued for a reason. They have security features embedded. They have RFID fields. Doubtless in Emily Nield’s universe, perfection won’t be achieved until we’re all waving our phones in each others faces. Sadly, Honey, we’re not there yet.  Although your humble correspondent would love to keep a digitized copy of a $100 bill on his cellphone and merely wave Ben Franklin’s smiling face around to fulfill his daily needs.

Nield whined how she would no longer be able to check “no” on the box asking “have you ever been arrested…” on job applications and other forms. County Solicitor Matthew Bennett undertook to expunge any record of this arrest from her record. And, had Nield kept her mouth shut instead of screaming like a stuck pig to the CBC and anyone else who would listen to her, nobody would have known. But now a simple Google search by any prospective employer will regale them with the tale of her arrest in Georgia.

Nield also claimed: “They kept saying ‘You’re now in the system. Any crime that’s going to be committed, your fingerprints are going to be searched,…I never committed a crime.”

Uh, you have a Nexus card, Sweetie. You provided your fingerprints when you were interviewed for that card. You’re already in the system.

As usual, reporting from other media sources tended to be somewhat more insightful.

Yeahhh. You’re not a U.S. citizen. You’re driving with an Ontario driver’s license. You claim to live in Tennessee. And you are stopped for speeding in Georgia. At some point this probably won’t end well.

Emily Nield is 27-years-old. She has a brand new master’s degree in geology (boy, the headhunters will be tripping all over themselves to recruit her with those skills!). She has probably already taken a picture of that degree and put it on her phone. However, from the sensational reporting, one would think she was a 17-year-old school girl. According to reports, she is from Kleinburg, Ontario.

Here in Florida, you can blow past a state trooper at Warp Speed, with a smashed windshield, your front and rear ends packed in, and perhaps both sides of your car, too. While typing away on your cellphone and driving with your knees. And the officer won’t even stir. But apparently, up in Georgia, they are somewhat more strict about enforcing the basic traffic laws.

The CBC reports that I-75 is used by Canadians as a travel route between Florida and Canada. On any given day, there are thousands of Ontario plates somewhere on I-75 between Michigan and Florida. A very small number of those cars are going to be pulled over for speeding. And not one of those drivers will be arrested. They will get their citation and be sent on their way.

One last thing, Emily: You might want to print out a copy of your I-94 and carry it along with your passport and Tennessee driver’s license from now on. The actual copies, not pictures on your cellphone. Just for good measure, join the CAA or AAA, as well. Those membership cards are good for roadside bail. 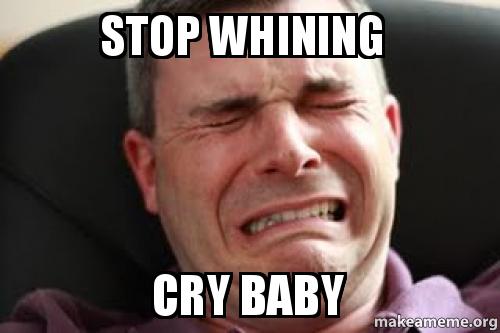 Your humble correspondent is the last one to defend the police. But come on, use some common sense. If you don’t want trouble, don’t go looking for trouble. And don’t hit the hornet’s nest with your rake.

Given the number of contradictions in Nield’s account, none of her claims can be believed. If she is telling the truth however, a freedom of information request for the the body cam, cruiser and jail house videos would make for a very lucrative lawsuit.