We’ve probably seen Wal-Mart’s latest marketing campaign: the sweaty workers starting their day. Waking up. Coffee. Kids. Surburbia. House with the American flag out front. A worker with a flag on his hard hat. Black and white alike. Very inspirational. 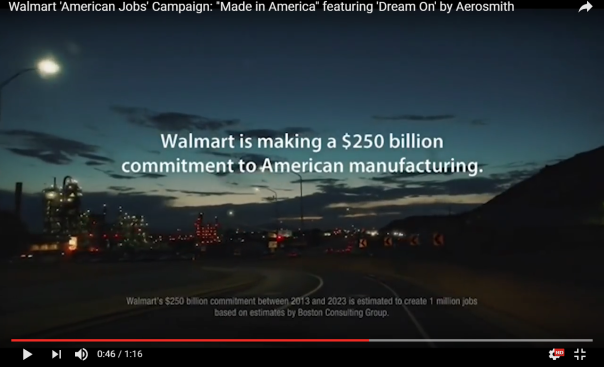 The commercial doesn’t appear to be selling any particular product. Only at the very end do you see the spot is paid for by Wal-Mart. They claim to be spending $250-billion and creating one million jobs.

Your humble correspondent dropped by his local Slave-Mart in Orlando, Florida (albeit reluctantly) in order to purchase some groceries and pet supplies.  In Orlando, as in other cities across America, retail choice has disappeared leaving a virtual monopoly: Wal-Mart.

I was delighted to see a beautiful pair of swimming trunks for sale in the store’s mens’ section. They were priced reasonably at $10. 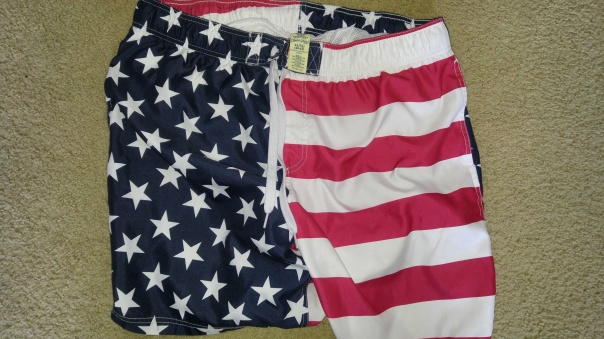 Could it be that the message was actually getting through their thick heads up at China-Mart Central in Bentonville, Arkansas? Surely given the insurmountable degree of disgust and ridicule Wal-Mart has earned over the decades, they wouldn’t be so brazen as to market such beautiful, patriotic clothing unless it was manufactured in the good ol’ U.S.of a? Uh, yeah. They would be so brazen. And pathetic. And greedy. 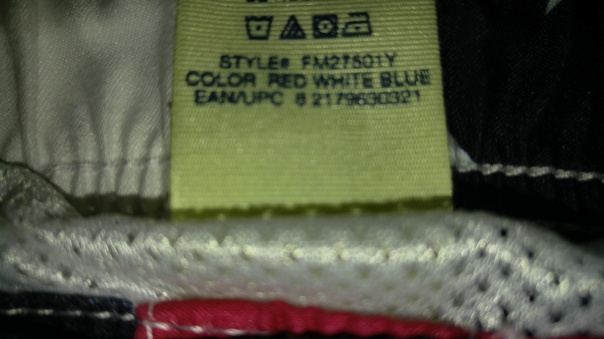 As noted in the YouTube videos’ comments, when Sam Walton was alive, it was company policy to stock Wal-Mart stores with American-made merchandise. Walton – like Henry Ford half-a-century before him – knew that well-paid American workers were the backbone of the country. When “Sam” died, his kids couldn’t wait to open up factories in China and start stripping away American jobs. 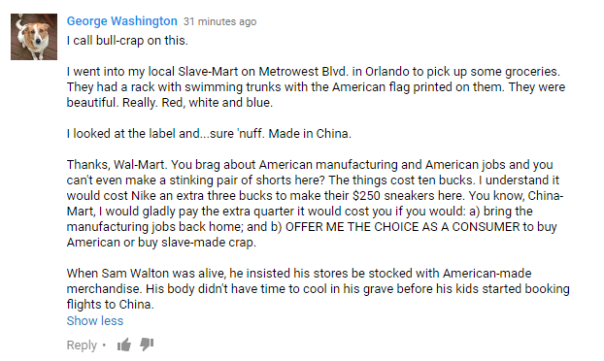 These fools inhabiting the top floors of America’s office towers just don’t get it. America will never come back, prosperity will never return, there will never be legitimate full employment until people are put back to work at good-paying jobs producing real products.

We ridicule adults working at fast-food establishments and big-box stores like Wal-Mart. But how many of those people had good-paying jobs in factories? How many of them lost their jobs when those factories closed down and the jobs were shipped off to China? How many of those workers were secondary workers dependent on the manufacturing jobs?

The minimum wage isn’t the problem. The problem is the number of adults working at jobs that were never meant to go to grown-adults supporting families.

Ironically, Wal-Mart has passed the point of diminishing returns. They are closing stores and struggling to maintain profitability. Maybe Wal-Mart should try an experiment: Take a small fraction of that $250-billion of theirs and start building new textile factories in North Carolina and South Carolina, Alabama, Tennessee, Georgia and other states whose manufacturing was decimated by Wal-Mart in the first place. Build new appliance manufacturing plants in Indiana, Ohio, Pennsylvania, New York and other rust-belt states. And here’s a revolutionary idea: start making computers in California again!

Bring back those jobs, Wal-Mart. Replace Made-in-China with Made in America!

If those $10 American Flag shorts now cost $12, I will happily pay that extra money. If I have to pay an extra $100 for the big-screen TV, here’s my money! Take it! If I can no longer buy a $300 laptop computer, I am willing to make that sacrifice.

It’s high time the executives and money junkies (an overlapping group) in corporate America got with the g.d. program, looked around them and came to their senses. Wal-Mart and the big-box stores need to pressure their sources to open plants in America, buy American and bring American jobs back home.

Between the construction jobs created by building the plants and the jobs created  by employing people to work inside them, the American economy will be red-hot. And unlike past periods of prosperity, this won’t be a fraudulent bubble. This one will be for real. But don’t feel left out, Banksters. Nothing is stopping you guys from financing the ultimate American recovery.

The rest of the world will be thankful. When America is once again prosperous and self-sufficient, its government won’t have to go around declaring war on the rest of the planet. In its two-and-a-half centuries of existence, America has never managed to find an enemy when the entire country is working and the economy is functioning on all cylinders.