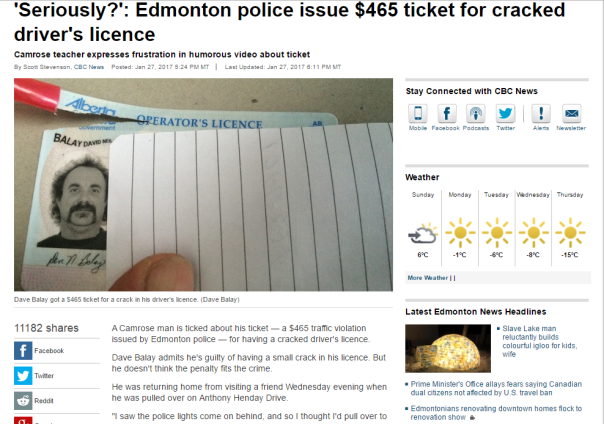 A Camrose man is ticked about his ticket — a $465 traffic violation issued by Edmonton police — for having a cracked driver’s licence.

Dave Balay admits he’s guilty of having a small crack in his licence. But he doesn’t think the penalty fits the crime.

He was returning home from visiting a friend Wednesday evening when he was pulled over on Anthony Henday Drive.

“I saw the police lights come on behind, and so I thought I’d pull over to the side to give them room to pass,” Balay said. “Because I wasn’t doing anything untoward.

“But then the police, of course, pulled in behind me.”

Dave Balay says he was driving this Honda Accord the evening he was pulled over.

One of the officers told Balay they’d had a tip about a swerving car that matched the description of his Honda Accord. Balay, 52, said he wasn’t worried because he doesn’t drink.

He gave the officer his driver’s licence, registration and insurance card.

In fairness, this story (and story being the operative word here) was featured in every corporate media outlet across the country, not just Canada’s state news agency. An man received a ticket for having a “cracked license.” This isn’t just CBC bullshit. It’s corporate media bullshit.

Balay says he was pulled over by officers of the Edmonton Police Department on suspicion of impaired driving. Apparently, police had received complaints of a car matching Balay’s description of a swerving car. Balay claimed he was “visiting a friend” but denied having been drinking.

The officers used their discretion and declined to give Balay a citation for the driving offenses, which would have resulted in C$543, six demerit points plus an enormous insurance surcharge. It’s only until you get down to the 16th and 17th paragraphs that you get a reality check from the Edmonton Police: Balay caught a break. The officers had reasonable grounds to lay a charge of careless driving, but given the circumstances (they didn’t necessarily see the driving for themselves) used a more obscure charge. Balay got a lesser fine, no points, and hopefully no insurance surcharge.

LettersToTheBeast is no fan of police workers, however Balay should have shaken the officer’s hand, said, “yes, sir, yes, sir, three bags full, sir,” counted his blessings and mail in the fine. But he decided to get his 15 minutes of fame on Facebook instead.

Balay vows to fight the fine. He says he will go to jail rather than pay it (keep in mind, you can’t be imprisoned in Canada for unpaid traffic fines). He claims to be an unemployed substitute school teacher.  He hopes to “reason with the prosecutor.” Given his behavior up until this point, Balay is in for a big surprise. The prosecutor will likely charge him with the original, underlying careless driving offense. And add the mutilated license charge on top of that. So Balay will be out well over $1,000. Plus his six points. Plus his insurance surcharge.

A merciful justice of the peace will obviously take Balay’s underemployment situation into account and put him on a payment plan that works for him.

As previously noted, LettersToTheBeast has been critical of police workers. The criticism is well-founded. However, the story implies that the officer who issued the original citation was a rookie. We certainly hope this won’t turn him into a jerk for the rest of his career and that, in the future, people who deserve a break at the side of the road will still get one. We need more good cops who use the brains their god gave them, and their own good common sense.

LettersToTheBeast also encourages parents in the Edmonton area to monitor their childrens’ education. If a David Balay happens to show up on their student timetables, we encourage you to demand their children be pulled out of his class. He is no example of honesty, character and straightforwardness.

As for Mr. Balay, now that you have had your 15 minutes, shut up. Pay the ticket. And drive safely.

And as the officer said, “Have a nice day.”

Now, what was that the CBC and the rest of the corporate media were saying about “fake news” again? 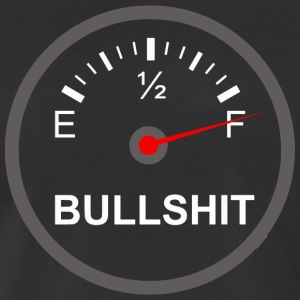