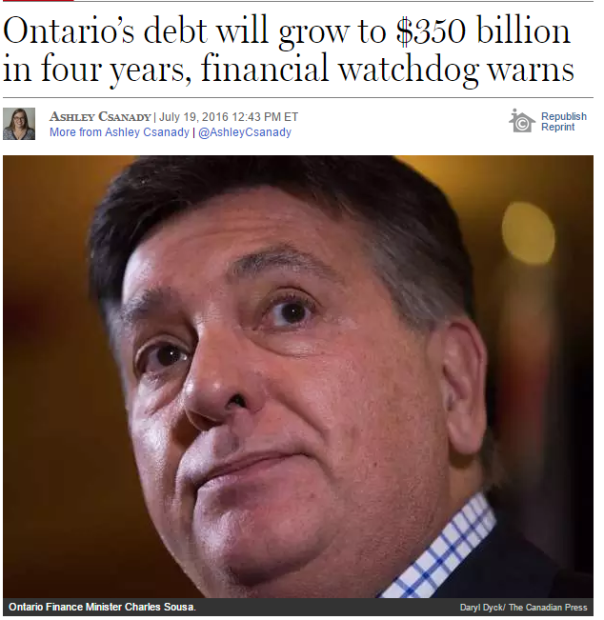 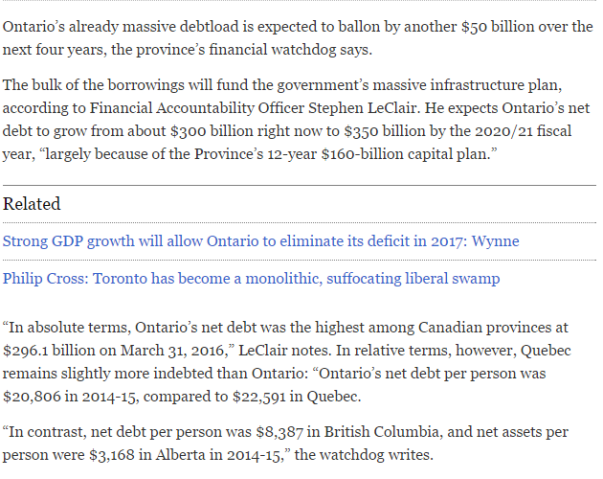 Ontario’s already massive debtload is expected to ballon by another $50 billion over the next four years, the province’s financial watchdog says.

The bulk of the borrowings will fund the government’s massive infrastructure plan, according to Financial Accountability Officer Stephen LeClair. He expects Ontario’s net debt to grow from about $300 billion right now to $350 billion by the 2020/21 fiscal year, “largely because of the Province’s 12-year $160-billion capital plan.”

Highest among Canadian provinces? Ontario’s debt is the largest sub-national debt on the entire planet!

“According to the 2016 budget, a one percentage point increase (e.g. from 3.6 to 4.6 per cent) in interest rates would increase interest payments by about $350 million in 2016-17, more than the budgets of the Ministries of Labour and Aboriginal Affairs,” the commentary states.

But the opposition says another $50 billion on the provincial debt in just four years is proof the Liberals can no longer be trusted with the public purse.

“No longer be trusted…” No longer? NO LONGER? When COULD they be trusted? The “Conservatives” completely de-railed the Mike Harris Common Sense Revolution by choosing for itself Ernie Eves after Harris retired. Eves, like most liberal-lites, had the main goal of being adored, or at least accepted, by the (then) dominant liberal media. Voters responded in the next election by electing real Liberals.

LeClair “confirmed what we’ve been saying for months – the government is using one-time money from asset sales, contingency funds and tax increases to artificially balance the budget in an election year. His report states very clearly that Ontario’s net debt will continue to rise due to annual deficits from 2018-19 to 2020-21,” said PC finance critic Vic Fedeli.

Then stop choosing proven losers as your party’s leaders, VIC. Eves: a complete, bumbling fool who had no business being even close to the premier’s office. John Tory: despite the name, nobody is sure if he is a Tory or a Liberal. He plays for both teams so masterfully one would think he’ll be retiring in Miami’s South Beach. The 2011 election was Hudak’s for the taking after Liberal premier Dalton McGuinty’s endless record of broken promises, profligate spending and tax increases. But, like the Toronto Maple Leafs (sic), Hudak still managed to wrest defeat from the jaws of victory. Just like John Tory did, four years before in 2007.

So what does the Progressive Conservative Party do? A complete soul-searching maybe? A search for the best qualified, truly conservative candidate? Preferably somebody outside the party? Uh, no. They run with proven loser Hudak again. Ontario voters respond by bestowing a majority government upon the Liberal Party led by Kathleen Wynne, a lesbian so hideously ugly she could stop a GO Train in its tracks. The Liberals, with the record of criminality, cronyism, corruption, incompetence, mismanagement and outright indifference and arrogance was still a better choice, in the minds of Ontario voters, than the agent of the Koch Brothers and Wal-Mart.

And look for the PCs to do no better in the next election as they chose Patrick Brown, a bible-thumping closet homosexual who jumped ship from the Harper Regime before it sank.

Political parties need to start recruiting leadership candidates from outside their own political circles. We have so serious problems that need to be solved. And recruiting the inner-circle politician who believes he has somehow earned the right to be leader is not going to help the people. As if any politician gives a rat’s ass about “the people.”

The FAO noted that Ontario has the highest net debt relative to revenue in the country — or the amount revenues would need to increase to pay off all its creditors.

For every dollar of provincial revenue, LeClair found Ontario owes $2.40, compared to $1.93 in Quebec and 84 cents in British Columbia.

Good people of Ontario: Seriously, folks. You have to get out. Now. You are totally fucked. 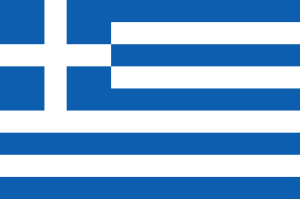 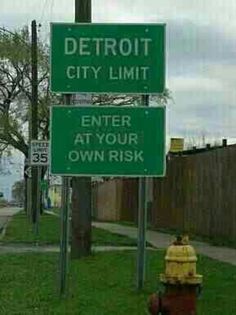