CBC’s Hamilton on-line newsroom ran a press release from the Halton Regional Police department requesting the public’s assistance in locating a local cracker who was wanted, among other things, for missing his court date for assaulting a store detective.

CBC ran the perp’s picture as well as this short blub:

Halton Police are asking the public to keep an eye out for a 20-year-old Burlington man who is wanted on a number of charges.

Police said the man stole several items from Oakville Place Mall in Oct. 2015 and managed to wrestle away from the security guard who caught him. The guard was injured in the struggle.

The accused has also failed to appear for four of his court dates, Halton officers said.

He’s described by police as having red hair and green eyes, standing 5-8 and weighing 140 pounds.

The 20-year-old has been charged with theft under $5,000, assault with intent to resist arrest and four counts of fail to appear.

Uh, a name would have helped. One would have thought that with his mugshot, his police record and the fact that the request came from the police department itself, his identity would be well established. One would be correct. Except the CBC chose not to run with it.

Fortunately, that bastion of investigative journalism, The Oakville Beaver (seriously, that’s the name of the paper) and its website,  InsideHalton.com had a more insightful analysis:

Halton police are asking for the public’s help in locating Burlington resident Travis Arsenault following an alleged assault on a security guard in Oakville.

Police allege that in October 2015 Arsenault visited the Oakville Place Mall where several items were stolen.

A loss prevention officer placed Arsenault under arrest at which point a struggle ensued.

The loss prevention officer was allegedly assaulted and injured during this struggle.

Arsenault has since failed to appear for his court dates and a warrant has been issued for his arrest.

He is wanted on charges of theft under $5,000, assault with intent to resist arrest, and four counts of failing to appear in court.

Arsenault is described as 5-foot-8, 140 pounds with red hair and green eyes.

He is known to frequent Burlington, Oakville, Hamilton and the surrounding areas. 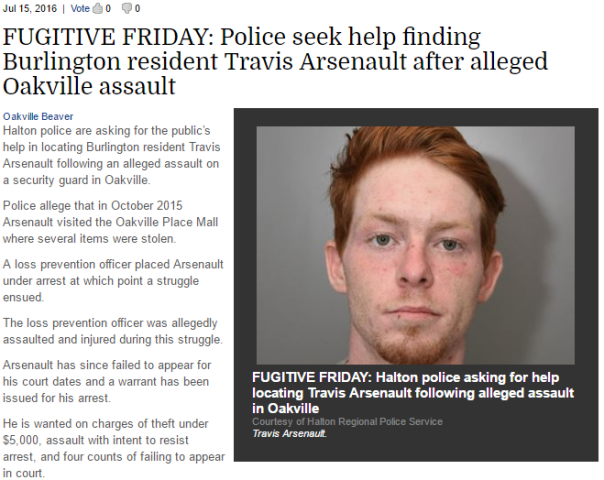 Any relation between Travis Arsenault and CBC’s bingo caller in London, Adrienne Arsenault, is purely coincidental.