Canada child benefit: How to calculate what your family will get

Online calculator only provides an ‘illustration’ of benefit amounts

…(A) family’s actual child benefit is calculated based on a family’s adjusted net income, which is the total net family income less any taxable benefits, such as the universal child care benefit, and plus any repayments to government on benefits such as the registered disability savings plan.

The Canada child benefit was the centrepiece of the federal government’s attempt to help the middle class. It kicks into effect on Canada Day and will increase payments to most Canadian families with children 17 and under.

This new tax-free benefit replaces both the income-tested tax-free Canada child tax benefit and the universal child care benefit, which was taxable.

The benefit is designed to provide more assistance to low-income families. The more a family earns the less they will receive in benefits.

Comments on this article were overwhelmingly negative, despite the efforts of the Liberal Party war room and the mindless shills doing the work for free.

The article itself reads like a press release from the finance department itself. The Shutterstock picture of an American family was a nice touch, too.

The Trudeau Liberals are continuing on the age-old government policy (which went unchallenged during the Harper “Conservative” years) of making Canadians pay for other Canadians’ kids. 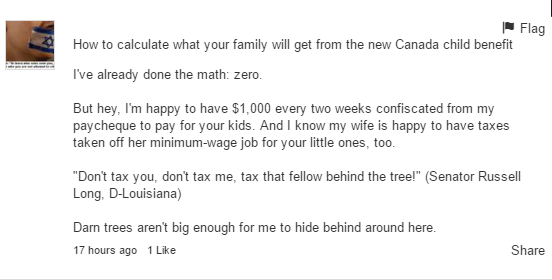 I’ve already done the math: zero. But hey, I’m happy to have $1,000 every two weeks confiscated from my paycheque to pay for your kids. And I know my wife is happy to have taxes taken off her minimum-wage job for your little lones, too. “Don’t tax you, don’t tax me, tax that fellow behind the tree!” (Senator Russell Long, D-Louisiana). Darn trees aren’t big enough for me to hide around here.

We are totally screwed…