As Trump doubles down on wall promise, Canada and Mexico must unite, says Agustin Barrios Gomez 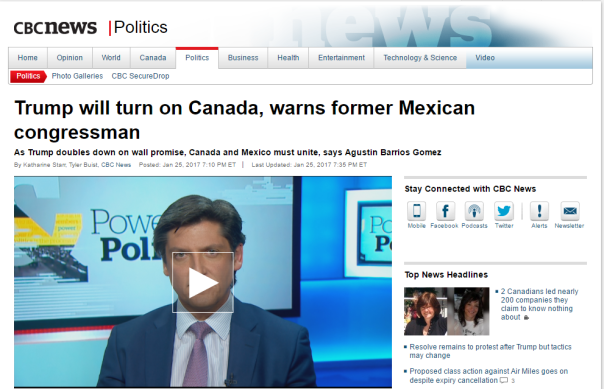 Canada’s state news agency trotted out a Mexican agent of the Council on Foreign Relations to continue its anti-Trump agenda and work what few Canadians still pay attention to corporate fake news into a lather.

The question of “how good” a U.S. president will be for Canada has been a discussion amongst Canadians since time immemorial. The question, frankly, is irrelevant. The job of the U.S. president is to look after the U.S. people. And to the horror of the entrenched establishment, Donald Trump is following through on that simple fact.

Donald Trump is not the president of Mexico. He is not the prime minister of Canada or Britain or even israel (oh, just wait until he makes that last one clear!). Donald Trump was elected to look after the American people and American interests first and foremost.

In calling for Trudeau to take a “principled stand,” Gomez presupposes, erroneously, that Justin Trudeau is a competent, principled leader. He is not. Justin Trudeau was elected leader of the Liberal Party for no other reason than his name: Trudeau. Trudeau is a self-described feminist. He is a guilt-ridden white social justice warrior (on Canadian taxpayers’ dime, of course). He doesn’t have a clue how to do anything or solve any problems, other than to throw money at it. The Liberal Party could have chosen, among other candidates, Marc Garneau, a former astronaut. Unfortunately, in their infinite wisdom, our Liberal friends went with the pothead. With the luxurious hair.

On the issue of “the wall,” Gomez called it a “horrible symbol of ignorance and said it was “zero likely” Mexico would pay for it. Gomez is wrong. Mexico will pay for it when Trump starts taxing remittances from the United States back to Mexico. Those remittances may even be eliminated when those remittances are brought into U.S. banking regulations and valid, verified social security numbers are collected in order to transmit those funds.

So, yes, one way or another, Mexico will pay for that wall.

Justin Trudeau’s Liberal Party was not elected on a wave of left-wing enthusiasm in Canada. The former prime minister, Conservative Stephen Harper, was arrogant, corrupt, and wasteful. Canada’s debt exploded under his reign. Conservative changed their vote to Liberal in 2015 and put the Conservatives in a corner.

One of the candidates running for the Conservative leadership is Kevin O’Leary, who has been compared to Donald Trump. He is very rich (by Canadian standards), brash, blunt, and, oh yes, starred in reality TV shows (Dragon’s Den in Canada and Shark Tank in the U.S.) O’Leary has been vilified since he first mused about running for the leadership. Establishment Conservative politicians want nothing to do with him. He has been ridiculed and dismissed by corporate fake news media (CBC included). In other words, he will be Canada’s next prime minister if the comparisons to Trump are taken to their logical conclusion.

When Agusto Barrois Gomez predicts Trump will “turn on” Canada, he makes a fatal flaw in his logic. Canadians, historically, have a higher standard of living than Americans (confiscatory taxation and stifling bureaucracy notwithstanding). Canadians have not swarmed across the U.S. border by the tens of millions, taken up residence in the U.S., terrorized Americans with gangs, sucked billions of dollars out of the American people by ending up on welfare, had anchor babies who have bankrupted American schools, and basically just demanded free stuff. So the comparison between Mexico and Canada is preposterous.

The only swarms of Canadians seen in the United States are those migrating towards the Walden Galleria, Great Lakes Crossing, Bellis Fair and hundreds of other U.S. shopping malls dotting the picturesque northern border.If you live in suburban Toronto and are destined for the Walden Galleria, don’t worry about directions. Your car knows the way.

Mexico is a corrupt, disease-filled, crime-ridden garbage dump. Neither Canada nor the United States need take any lessons from them. And if Trump’s impressive election victory proved anything, it is that Americans are done being manipulated by the Council on Foreign Relations.

Justin Trudeau, and Canada’s government by extension, have two choices: It can work with the Trump administration and remind it of the important trade relationship between the U.S. and Canada. It can remind Trump that Canada is the number one single largest purchaser of U.S. goods and services. Not Britain. Not Japan. Not China. Canada. It can remind Trump of the damage the U.S. inflicted upon border cities such as Niagara Falls and Buffalo when it imposed a passport requirement upon Canadians. Or…the Trudeau government can go the path of least resistance by demagoguing  Trump and his administration, and endearing itself it its loony-left Liberal base as the Canadian dollar continues its collapse and what’s left of Canadian manufacturing – the auto industry chief among it – disappears entirely.

Here at LettersToTheBeast, our money is on option two. But that’s okay. It’s nothing Prime Minister O’Leary can’t fix.

In the interest of full disclosure, your humble correspondent at LettersToTheBeast is a Canadian, married to his American trophy wife.